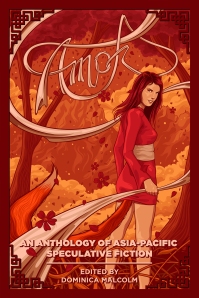 Amok: An Anthology of Asia-Pacific Speculative Fiction, edited by Dominica Malcolm, was a finalist for Best Anthology in the 2014 Aurealis Awards for Australian speculative fiction writers and editors.

In an anthology that spans from India in the west to Hawai‛i in the east, and as far south as Australia and New Zealand, 24 authors bring you an exciting range of tales set in the past, present, and future.

Find out what arises when a struggling Malaysian student seeks help for her studies in Chinatown, and what happens when the garbage in the Pacific Ocean is seen as a valuable treasure.

Read these stories and so many more in Amok: An Anthology of Asia-Pacific Speculative Fiction.

Available exclusively for Kindle on Amazon

Want the paperback and the ebook? If you buy the paperback on Amazon, you can get the Kindle edition for free through their Matchbook program.

4 thoughts on “Amok: An Anthology of Asia-Pacific Speculative Fiction”